skip to main | skip to sidebar

Governing is a lot harder than it looks

So there won't be an imposed limit of 18 children in primary 1-3...the SNP in full retreat. At a recent school council meeting the headteacher speculated that such a reduction in the early years would simply lead to a reduction in per capita budgets for schools meaning a reduction in the economy of scale which bigger schools enjoy. Personally, I don't agree that reducing class sizes beyond about 27 makes a blind bit of difference. What does make the difference is the quality of teaching, the appropriateness of the curriculum, exra support for those who need it and the teachers' expectations of the child - above all that, though, is the encouragement the child gets from its parents. I'm afraid there is no substitute for consistency in the message. And no matter how good a teacher/school is and no matter how much they inspire, it takes a pretty exceptional child to overcome parental indifference. Never mind, I shall enjoy watching the Nats dance on the point of a thousand needles as they try to wriggle off a thousand hooks..as they explain why they're not hiring 1000 s of extra teachers: heh, heh...governing is a lot harder than it looks.

I know I'm supposed to say 'Well done, Glasgow' ...maybe it's sour grapes ...but the way I see it, the Commonwealth Games means hundreds of millions of extra pounds being invested in Glasgow's regeneration above and beyond the extra millions already being ploughed in: Glasgow gave the game away when they led the charge to co-operate in freezing the council tax - freezing the council tax isn't hard for them - they haven't raised their local taxes for a couple of years because they get so much in extra funds for housing, for regeneration, to address health inequalities etc.

Meanwhile I represent a ward with some of the country's poorest, sickest people and in Granton we can't get a penny for new housing or new health facilities or new schools. It has taken me the best part of 5 years to get 1 primary school refurbished and a new family centre promised [still not a single brick laid despite originally intended to be completed by now] to replace a community centre that is crumbling despite all the good work going on in it.

Last week we were shown statistics demonstrating, for example, that the number of people being admitted to hospital from the EH5 1 data zone for self harming (attempting suicide) is 162% above the national average. Poor people in Granton are just as desperate as poor people in Glasgow.

I don't grudge Glasgow any investment they get: I just want my constituents to be treated the same. I, like them, am tired of waiting for the rest of the world to catch up with what we all know down here in EH5 1 - things are bad and not getting any better. The area needs the physical evidence of improvement - new houses, new schools, new environment to encourage people to believe a different way is possible. At the moment, none look very likely. 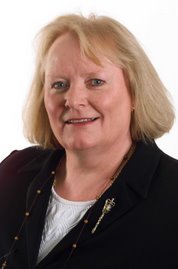 Elizabeth Maginnis
I am the Labour Councillor for the Forth Ward and have been a councillor for 21 years. As well as being a councillor I also manage the Pilton Equalities Project which is a locally based charity providing services for older and other vulnerable people. I welcome any comments so long as they stay within the boundaries of courtesy...